Recently we have been doing a bit of work on our home, with one of the biggest changes being made to our living room. 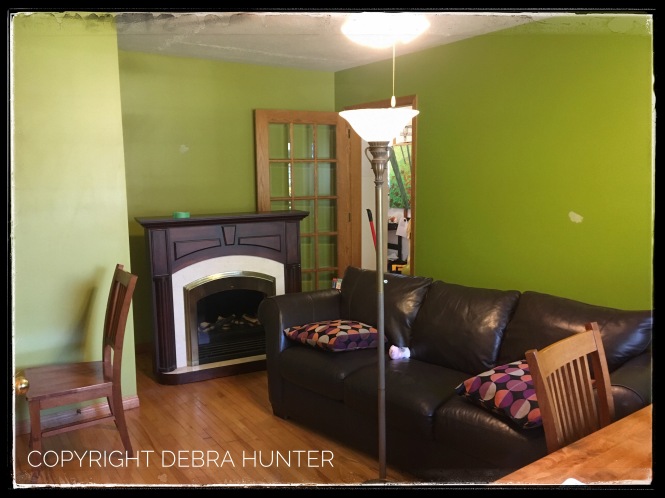 (Furniture. pulled out getting ready to paint.)

We were needing to repaint the room, and though we liked the bold color we had before, we decided that maybe it would be fun to try something different. We went to the paint store with some colors in mind, but while there we also chose a few random swatches. The color we ended up choosing was not at all a color I ever would have dreamed of painting a living room, but we did as we wanted a complete change.

The first few hours, I have to admit, I wondered “what have I done?”. By the next morning the choice seemed better. A few days in, I loved the color.

Our living room had gone from bright to grown up. We still needed to add pillows, a carpet and art work, but the room was coming together.

With Thankgiving this weekend, we decided to dress up the room in the festive spirit. A few decorations, and the room was dressed for the holiday. 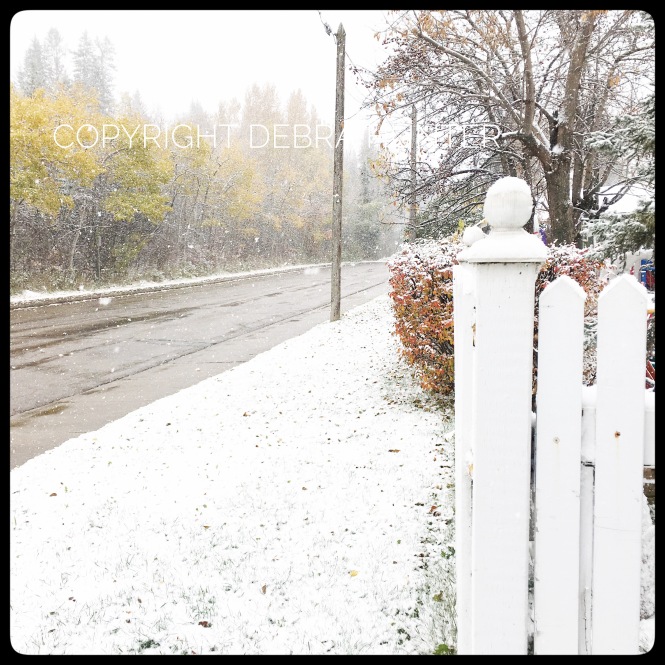 Today, shortly after noon, flakes of snow started falling from the sky. At first it was intermittent, but within a half hour it was pretty clear that the snow was increasing and beginning to lay.

I had held off as long as possible with harvesting the garden. The weather had been fairly nice, and I like the convenience of just popping out to the yard to get the vegetables for supper. By 12:30 pm it was clear that I needed to go out and dig up the garden.

Sometimes “not” getting around to doing something works in your favour. This is exactly what had happened in the potato patch. At some point during our very wet summer I had laid down boards to be able to walk in the garden, and for some reason I had never removed them. Luckily under the boards the ground was still soft and completely unfrozen making for easy digging of the potatoes.

The next bed was a little frostier, frozen about an inch or two deep. With snow laying it was a guessing game as to what was left in the bed.

The garlic had been harvested weeks ago from this bed, and the sunflowers at the end were “volunteers”, however I still managed to dig up several onions and carrots from this spot.

As I dug up this bed and the potato patch I realized that it might be a good idea to change the vegetable garden location next year. The question is whether to garden in the ground or garden in raised troughs. Our raised troughs have been amazing this year for growing, so it may be the way to go.

The troughs also had to be harvested. Beets and carrots were still waiting to be picked. The chard and cabbage have been left, with hopes that the chard may survive a few days of cold. The cabbage has been feasted upon by cabbage worms in the last couple of days so it wasn’t in the best shape.

The final task was to plant the garlic for next year. This time trying a new spot at the front of the house. Again this bed was frozen a few inches deep. After working the soil I managed to plant a small area of garlic. If the weather warms up next week ( as the forecast says it will), I will plant more garlic, but at least I have a bit in the ground just in case winter is here to stay.

Two and a half hours later, soaking wet, frozen, and covered with mud, the veggies were all safe inside. Where the veggies were grown is now completely covered in snow. Gardening season has come to an abrupt end. Hard to believe this is the beginning of October.

It seems like March has been a month of renewing, we’ve been reorganizing, refreshing, and basically eliminating a lot of the rubbish in our life.

Our dining table was one of these projects. Still sturdy and strong, and a style we quite liked, the table however was showing the effects of heavy family use. Hundreds of dinners, plus many hours of working and crafting and playing, had left scratches and dents across the table top. I figured we were at the point where we had nothing to lose and that perhaps it was worth attempting to refinish the table top.

Before refinishing. A well loved and well used table. 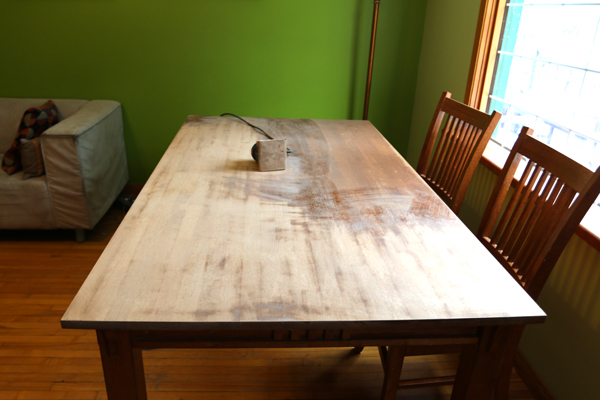 The point of no return. A good couple of hours were spent with the palm sander. This is where you wonder if you had made the right decision. 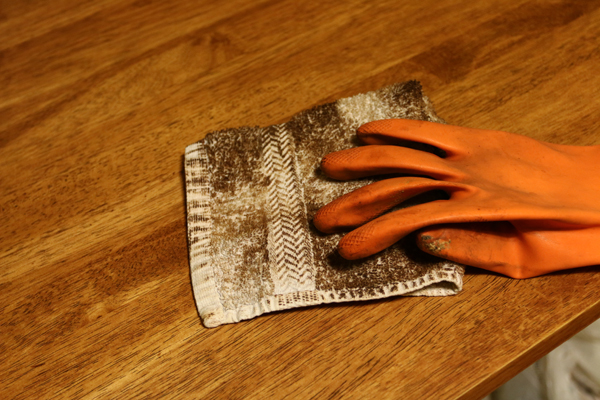 Praying that the wiping stain matches. I held my breath through this stage and through the topcoat stage as well. It was my first experience with wiping stains and I was very impressed. I was also able to refinish a small portion of wood flooring ( a parquet floor quick fix that actually worked!) and a south facing window sill at the same time.

The finished table. I was completely thrilled with the result. Twenty-five dollars and a bit of time and the table is literally as good as new…….or better…….I think the topcoat I used is better than the one originally on the table so hopefully this will take a lot more wear.

And now to research the next project, the 1946 the table is sitting on. Only by the table is it worn, the rest of the floor is in great shape. Does anyone have any idea what the finish on the floor is? Shellac? Varnish? I am toying with just stripping and sanding individual boards and refinishing them. The way the boards are laid I think it will blend well ( I did a blending on the parquet floor and it worked). If anyone has any thoughts let me know.