The $600 million Loss That No One is Talking About

$600 million is the amount the BC NDP government is actively trying to remove from the BC economy each year, through their 2018 budget, yet no one is talking about it.

Have they yet to figure it out?

Are math skills and economic skills so poor?

Or is ideology at the cost to the average British Columbian more important?

Let me fill you in.

The BC 2018 budget revealed a speculation “tax”. However, it isn’t a “tax”, it is a penalty. The properties affected already pay property taxes at about 30% more than a British Columbian resident who receives a “grant”; yes a nifty two tiered pricing that seems to never be questioned. This is a “speculation” tax ON TOP. But it isn’t a tax, is it? “Sin tax” or “luxury tax” are taxes that are applied at the point of sale. The consumer knows openly the financial commitment that is required of them and enter into the purchase and taxation in good faith.

This “speculation tax” tax is a fine, just like you are being fined for breaking the law. It is ALL it can be. This is a tax for breaking a law that doesn’t exist. The BC NDP government are trying to create laws of their own. The BC NDP government are making up imaginary and discriminatory laws, under the guise of “policy”, that breaks the Canadian Charter of Rights that ensures all Canadians are equal, have equal opportunity, and can live free from discrimination. The BC NDP Government are concocting fake laws that make it okay to fine people from out-of-province who LEGALLY bought property, in good faith, in their province years ago. The BC NDP government are trying to cleanse their province of the dirty out-of-province owners that they deem criminal for having invested in the province of British Columbia; “criminal” is all we can be as the owners are being fined. FINED.

So, The BC NDP government ramped up their xenophobic rhetoric, stood on their virtual soap boxes, and shouted to their people that the BC affordable housing crisis is the fault of “out-of-province” and foreign property owners. Every one of the 4.8 million BC residents are being destroyed by the “out-of-province” and foreign owners according to the government. And so they ramped up the campaign of dislike.

But here is what the BC NDP government didn’t tell you, this is the story of a $600 million per year loss.

According to the Financial Post story on March 12, 2018 by Geoffrey Morgan, there are approximately 15,000 residential properties targeted by this speculation tax. The government has fed a narrative to their population that these homes are just sitting empty while owners wait for the value to increase. Interestingly, the government is wrong on both counts. The properties were not bought for the purpose of speculation (some have been owned for generations). Nor do the properties sit empty, rather they are residences used in conjunction with other properties in other provinces. These owners identify as bi-provincial, and the ability to live freely anywhere in Canada again is covered under the Charter. In this era of self identity being so protected by the federal government, it is shocking that a provincial government would penalize these owners as identifying as bi-provincial; even more shocking for a left leaning government to discriminate against a population as to how they self identify.

The government may be fine with discriminating against the “bi” community, but what they are also doing is harming the ones that they profess to help.

What the BC NDP government have failed to tell their population, for fear that it will undermine their ideological xenophobic dislike of “out-of-province” owners, is that “out-of-province” property owners are actually INVESTORS. We invest in the province, we add to the economy, with “out-of-province” money. Through owning property, each year we spend a considerable amount of money on product and services in BC. For us personally, it is around $40K annually.

Here is the math.

$600 MILLION per year…….and this is on top of the $1.4 billion in the form of the yearly Alberta tourism dollars.

What the government hasn’t equated, is that if these homes are either sold or locked up and left “empty” as their hallucination says they are, not only is $600 million of out-of-province investment removed from the BC economy each year, so are jobs. The $600 million is money that the BC NDP government can not generate from their population, this is money GIFTED by Canadians from other provinces to the province and citizens of British Columbia. The homes go, the yearly investment goes, and jobs go.

A $600 million yearly loss to the economy equates to a job loss of 20,000 entry level full time jobs.

20,000 PEOPLE PUT OUT OF WORK BY THE BC NDP GOVERNMENT THROUGH THEIR POLICY OF IDEOLOGICAL DISLIKE OF OTHER CANADIANS………. but the job losses will greatly exceed that, because all of this bad press will also impact the BC tourism industry, wine industry, and real estate industries. The BC NDP government is CHOOSING to put their province into a recession.

The BC NDP government have chosen to attack 15,000 property owners in an attempt to put 20,000 of their own residents out of work.

In an attempt to deport 15,000 “out-of-province” investors/property owners, the government will forcibly create unemployment for 20,000 BC residents.

Now when you take into account that in 2016 the average BC household had a 2.4 person occupancy, it means that the best case scenario is that these targeted homes, if all emptied, would house 36,000 people. Yet, 20,000 of those people will now be unemployed, which brings us down to 16,000 working people. Assume the 0.4 of the household count are children, and that reduces the buying power by another 6000 people bringing the total number of people potentially employed to be able to pay for housing down to 10,000.

So we now have 10,000 who will benefit from this xenophobic “speculation tax”, but we aren’t done yet.

Back to math class.

But there is more to the story.

The BCHAF proposal that the “speculation tax” was based on was focused ONLY on the Lower Mainland area. This was the area of housing concern.

The homes needed aren’t the ones in Kelowna, Nanaimo, Victoria or the Gulf Islands (islands of which some have no ferry or electricity) which is where the vast majority of the affected properties are. The properties they need are homes within spitting distance of English Bay in Vancouver.

Is anyone seeing a problem here?

The BC NDP government is consciously choosing to break the Canadian Charter of Rights, drive away investment, drive away tourism, create unemployment, create a self-created recession, and still not have housing in the geographic area where it is needed.

But we aren’t done……

There is one last piece to the puzzle.

People who own property are generally “numbers people”. Seriously, there isn’t a thing that isn’t spreadsheeted. They also tend to be competitive. Due to this I see a potential twist. I look into my crystal ball and I see some owners sticking it to the BC NDP government on the basis of “affordable housing”. I foresee owners of million dollar homes selling them to big off shore money, and in turn buying up the more modest affordable homes in BC to beat the tax. Cash sales. No chain. Bam. You think BC has an affordable home crisis now, well this will seal up the inventory for sure.

So there is the story.

You have to admit, the BC NDP government are “pretty special” in coming up with such an amazing “speculation tax” policy. Personally, I don’t think this is the political legacy I would wish to be known for.

Naturally dyed in goldenrod and indigo.

A new project is in the works, Pure Wear Canada. This is an expansion of what started with my project Handmade in Canada. Pure Wear Canada is focusing on naturally dyed premium knits, but not contained to a Canadian theme.

Currently works are in progress and will be appearing in the online shop at www.purewearcanada.com over the next few weeks. This is an exciting direction that opens up more and more possibilities. Pop by the site, or check us out on Facebook and Instagram (@purewearcanada) if you have a spare minute. 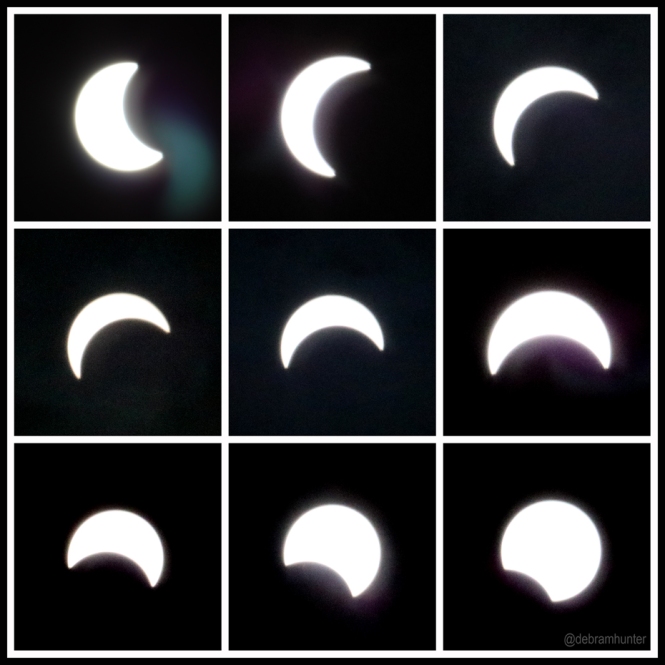 Flowers in black and white. A different way to view our natural world. Seeing form over color. An artistic way to interpret our gardens. Seeing things differently, that is what photography should be about. http://www.debra-hunter.com Photography by Debra Hunter Red Deer, Alberta and Pender Island, BC, Canada . . . . Ads belong to WordPress

via The Garden in Black and White — Debra Hunter – Canadian photography, art and handmade 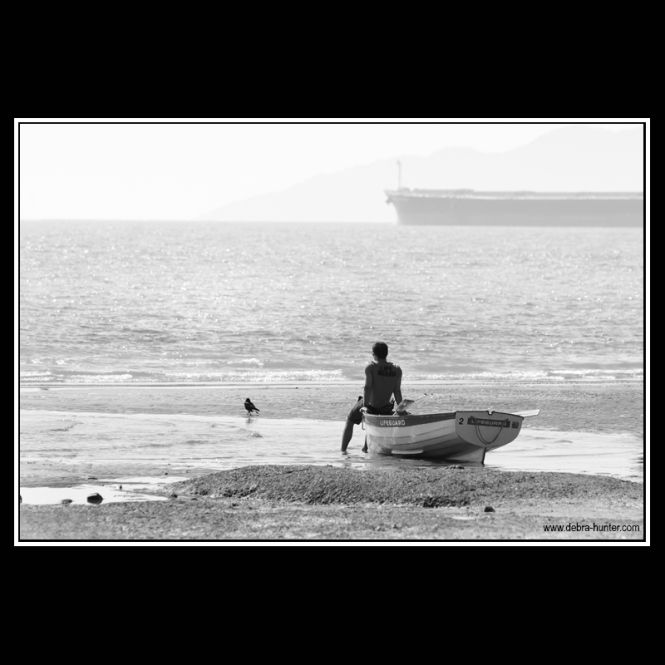 Yesterday I was shooting a few architectural images for a client. Even when I am shooting something specific, I often look to take a few shots that appeal to me simply for their artistic merit.

The contrast of the steep peak of the church against the clouds caught my eye. Such strong lines made it so interesting.

The historic home edited to black and white was like stepping back in time. Elegant and timeless.

Other images from yesterday’s shooting can be found by clicking HERE.

It is so nice that spring has arrived, the blue skies are back, and soon we may even have leaves making for prettier pictures. 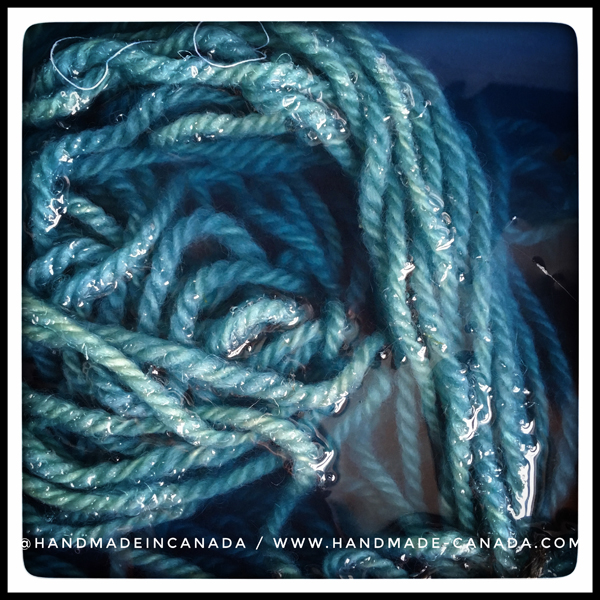 Today I have a little indigo dyeing going on. I needed a light blue for a piece I have been commissioned to create, a blue to echo the Salish Sea. Indigo dyeing requires a lot of time and preparation. Yesterday I worked on creating the stock solution. Today was creating the working vat and then […]

via Indigo Dyeing — Handmade in Canada

Homemade rosemary bread is a favourite to make when we are at our place in the Gulf Islands. With rosemary growing fresh in our garden year round, it is a great addition to a basic white bread recipe. This bread is a great savoury bread to enjoy with soups and stews. 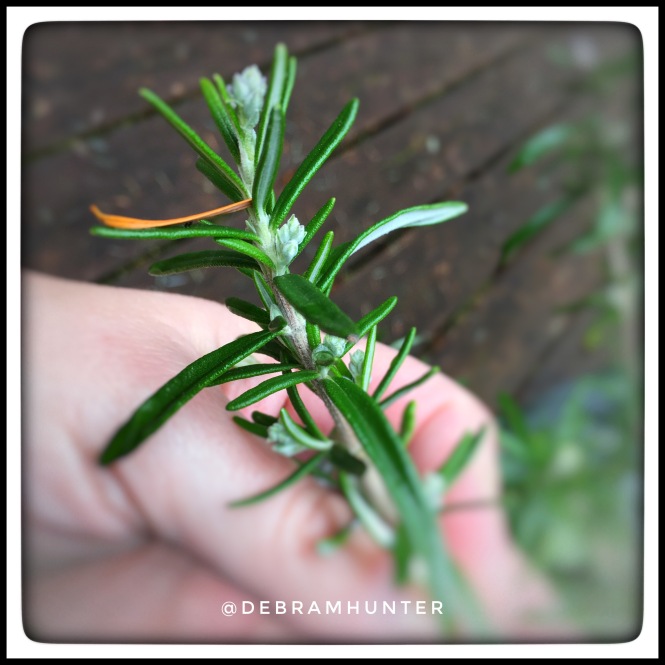 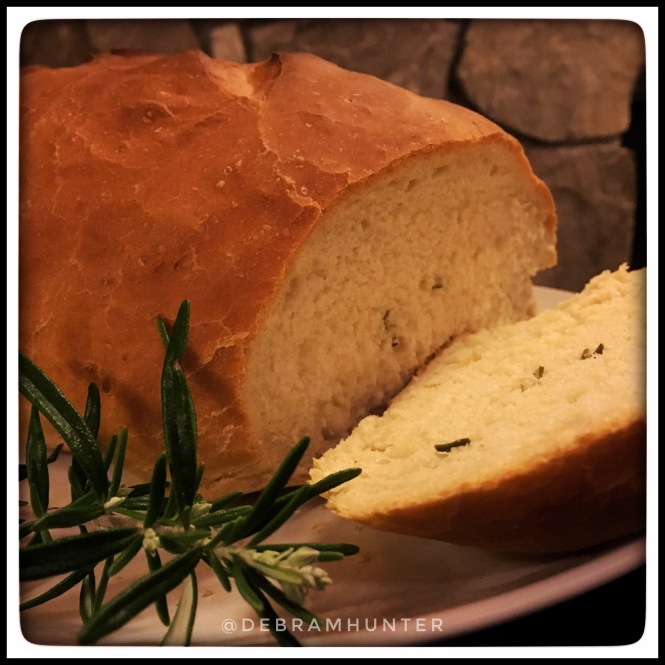 More driving, more travel. Here are a few images from yesterday’s drive along the Trans Canada Highway through Alberta and British Columbia (Canada). 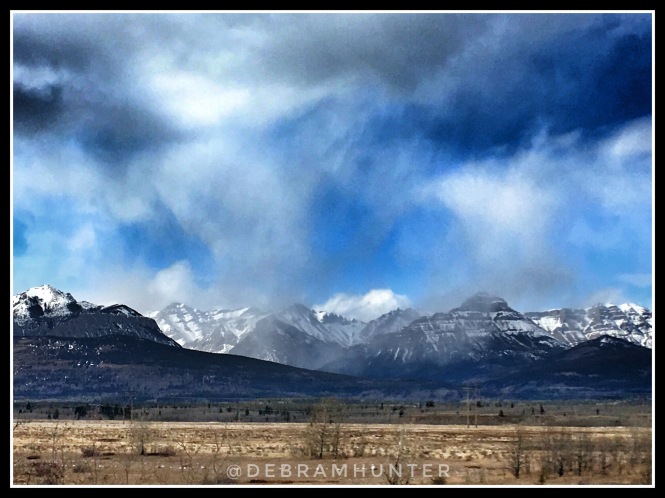 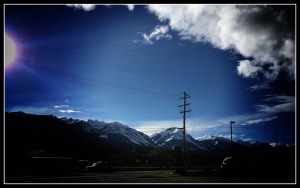 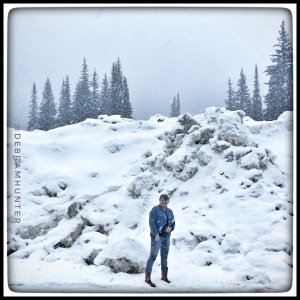 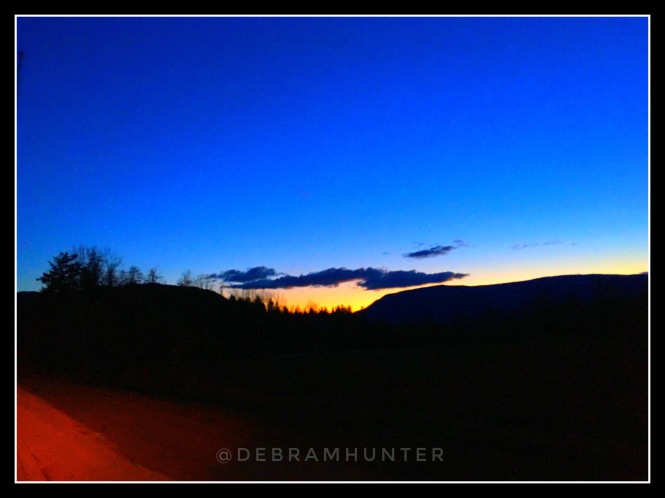 After days and days of cold temperatures and snow, it has finally warmed up . By afternoon the temperature had reached +2C and it seemed the perfect weather for a ski.

Today I decided to try Heritage Ranch for my ski spot, I thought a (literal) change of scenery would be nice, instead of skiing my usual route.

The trails were definitely a little bit slippy today with the warming temperatures. I will admit I paused at the top of the long hill before going down it, trying to decide how slippery it was going to be coming back up. After watching another skier tackle it with a slow “snowplow”, I decided to take the same approach.

As I only had a limited amount of time to ski, the plan was to go down to the base of the hill to the large open field and then turn around and go back up. 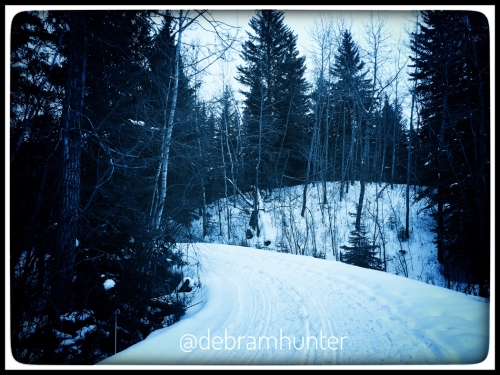 At the bottom of the hill I had a change of plan. It was pretty slippery in spots on the hill, and I knew it was not going to be fun going back up. I decided to go with “Plan B” and take the bridleway that snakes through the back way instead. It seemed to be a better option to break trail through fluffy snow, than spend the next 10 – 15 minutes sliding uphill. The “unofficial way ” seemed to be the most sensible option. 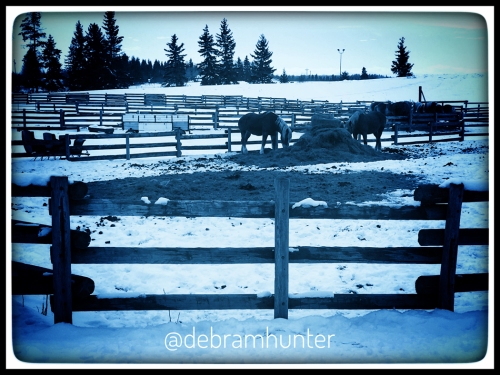 This just might be the last ski of the season, at least for skiing in Red Deer (Alberta, Canada). The forecast for the next six days is calling for temperatures above zero. Perhaps spring IS going to arrive. 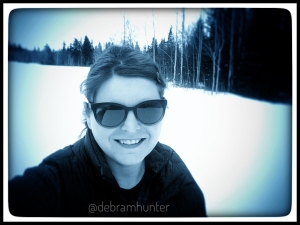