Yesterday we made the journey from the west coast of Canada back to Alberta. We had been watching weather forecasts for a few days trying to make the right (and safe) choice as to when to make the journey. Throughout the last few days of last week the forecast of what was to come was looking more and more serious.  Reports were looking more serious by the day and we made the final decision that we had to leave the coast Saturday morning if we had any chance of beating the storm.

Ferry at Mayne Island taken with an iPhone through ice on the window.

We caught the morning ferry from Pender Island to the mainland, docked and were on our way east by noon.

Luckily the roads were busy through the Lower Mainland but in pretty good shape. Even the Coquihalla wasn’t the worst we have ever driven. Visibility was okay and there wasn’t any deep snow on the road like we have faced on other occasions.

As we drove through the afternoon and evening we kept checking our phone for road conditions and weather information. The trip is a little over 1100 KM in distance through multiple mountain passes. The last thing we want is to be stuck due to a road closure, weather or avalanche control. 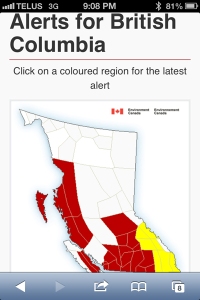 Below are the weather reports. 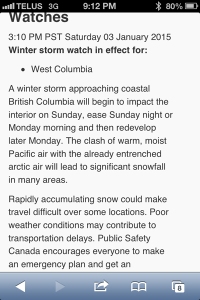 All indications were that the worst weather was coming through the next day. If we buckled down and switched drivers back and forth, one driving, one resting, we should be home before the worst of the weather took hold.

We drove the Rogers Pass which was almost empty of traffic except for a few semis.

An almost full moon at the summit of the Rogers Pass.

We enjoyed an almost full moon at the summit of the Rogers Pass and then carried down to the town of Golden, BC. In Golden we had a bit of a shock, as we hit the city limits we narrowly missed hitting a deer by maybe 1 or two inches. It is pretty strange to see a deer bounce out from the bush and land right in front of your moving vehicle. I don’t know how we avoided it, and it was one big deer bounding out across the road, but I am sure happy we didn’t hit the deer. Obviously there are no pictures of the deer………..grabbing a camera wasn’t the first thing that came to mind!

We swapped drivers in Golden and my husband drove the Kicking Horse Pass. It isn’t my favorite. Hairpin turns. Steep drops. Semis that aren’t fussy what side of the road they take. Ice. I was quite happy to “not” be the driver. Somehow we made it through all the mountain passes with reasonable, but icy, winter driving conditions. We felt we had made the right decision to not only leave the coast when we did, but push through the passes. 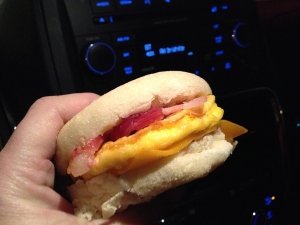 We’ve discovered that when long haul driving that there is a certain point, sometime between 1:00 am and 5:00 am when you start to fixate on a food that you really want. One trip it was a 2:00 am poutine, while in the middle of the mountains…….not happening. Another trip it was bacon. No kidding we spent at least 2 hours discussing how there should be a contraption that went over the engine so that you could cook bacon while driving. We really wanted bacon (can you tell). The breakfast sandwich delivered bacon, what a treat.

A little over an hour later and we were home. We had gone from +6C to -37C (with windchill) in less than 24 hours and out run the storm that was forecast.

We continued to watch the road reports and weather updates today and it wasn’t looking very nice.

Accidents, road closures for avalanche control, poor visibility and one report of a 6 car pile up on social media. We were sure the hard drive through was worth it to be home safe before the storm. If we weren’t sure from reading the reports, the webcam images proved it, the first storm of 2015 was about to hit British Columbia. It was much better to be safe at home rather than on a dangerous highway. 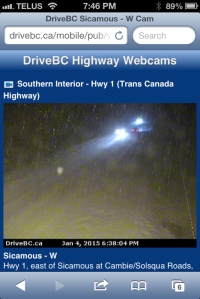 3 thoughts on “Outrunning the Storm”