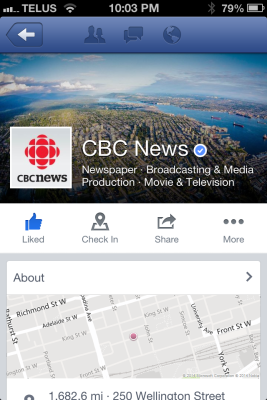 I like to think of myself as an “informed” person. I listen to the news on the radio. I watch news on T.V.. I read the news on-line. I also follow news on social media as the comments are a great barometer of society’s opinion. For good measure I not only follow news produced by Canadian news organizations, but also British ones; it gives an interesting perspective.

In addition to “following”, I like to interact. Interacting on social media allows your opinion and thoughts to be heard. Sometimes if you watch very closely things happen and situations change because of comments made on social media. Interaction with regards to news events is a very good thing in a free society, it keeps society interested, and involved, and shows many sides to every story. Interaction and social comment can bring about change, out corruption and bring to light more information. Social interaction allows for public opinion, public speculation and public reaction.

So let me share a story, a personal story, a story from last night. It involves a CBC story on their Facebook page, a CBC story involving CBC. I had read an “official statement” that CBC had given and a portion of it was “off”. The time-line of the chain of events was also curious if one was to think of what set everything in motion, and what wasn’t turned over to police by CBC right from the start. Something is “off”.  I alluded to the fact that a small portion of the statement made was way too personal for it to have come from an executive and wondered if there was a personal connection to the story, not just a business one. I also pointed out that there were inconsistencies on-line with regards to the executive, information that had come from the executive themself. (It wasn’t a case of playing Sherlock, I compared two items on the first page of a “Google” search…..an interview comment by the executive from a few years ago tipped me off to spend two minutes looking, sometimes a comment makes you look for credibility or lack there of).

So I made a comment. No bad language. Not racist. Not sexist. I just pointed out a few very obvious items and that it was very curious. I’m sure thousands have thought the same thing. Something, at least in the way it is reported in the media, is “off”. I thought it would be interesting to see what others thought. After all that is why CBC places a news story on their Facebook page with comments turned on, to have a venue for social opinion.

Any guesses as to what happened?

First the comment was not approved, CBC would not publish it, they CENSORED it. This happened immediately (which is really interesting as it was between 10pm and midnight M.S.T. so CBC must have someone moderating comments 24/7). First I giggled and thought “CBC has their knickers in a twist.” . Then, of course, I copied and pasted my comment to another site……and then told CBC I had done it ( I like transparency). One could say I don’t deal well with oppression (so much for the helpless female stereotype!).

The second thing happened today. Today I was BANNED from being able to make a comment on ANY CBC Facebook story.

The first response of some people may be “so what, you brought it on yourself”, or “its only social media” . I would like those reading to think deeper. Think about the implications. This news outlet is picking and choosing the comments they allow. They are manipulating their reading population by only allowing posts that they deem are acceptable. They are manipulating the public to only see their organization as “the good guys”. They are manipulating the public to only see the “he says/ she says” portion of the news event even though the CBC is deeply implicated in the story if at least one of the allegations are true. And when one random Facebook poster points out something is “off”, it not only censors the comment, but BANS the poster from their whole site.

How can the CBC report this story with impartiality and transparency if they are manipulating the public’s comments?

CBC has chosen to place this story, a story in which the CBC is deeply implicated, on their Facebook page to try and manipulate public opinion in their favor. They will let the “he camp” and “she camp” fight it out ( I bet you’ve figured out the news story by now!),  with vastly more support for the “she camp”, but mention CBC’s involvement and the result is a total BAN from their Facebook page. Whether CBC likes it or not, they ARE part of the news story. Their management IS part of the news story.The story is a threesome: the women, the radio personality, and the CBC.

If the CBC doesn’t like being examined on social media don’t put the story on the CBC Facebook site. That is fine. The thing that is really twisted, crooked and manipulative is removing comments that question the CBC organization. That is manipulating the public opinion and that is most certainly not the job of a news organization, especially one that is a crown corporation.

A crown corporation manipulating public opinion in their favor is a problem.

Using the media that they control, country wide, on tax payer’s dollars, to promote only their own interests and censor and manipulate public opinion is wrong.

How long has this been going on?

What else in this country has been swayed by the censoring of public opinion? No one knows the censorship and manipulation is going on until it happens to them.

CBC, according to their website, pride themselves on “accountability”. You can check out the link HERE.

Here is a quote directly from the page linked above:

CBC/Radio-Canada will keep working to honour and strengthen the trust Canadians place in us by entrenching accountability and transparency in everything we do as a broadcaster and as a corporation.

How can we “trust” an organization that censors?

How can an organization that “censors” the public be transparent?

Why are we as Canadian tax payers paying for such a manipulative and censoring organization?

The CBC should NOT play favorites, they should not manipulate the optics of public opinion. If the CBC can not provide equal opportunity on their social media sites for every single Canadian to express their opinion, they should simply provide NO options for comment.

This is an all or nothing scenario. One thing is for sure, an organization paid for by the tax payers has NO right to censor the very people paying their wages.

Until very, very recently I highly valued the CBC. I thought they were honest, reputable, fair; it is what one would expect of a publicly funded crown corporation. Now I know I was wrong. Very wrong.

What the CBC is doing is manipulating public opinion to suit their own means. This is very wrong when the CBC exists to  provide Canada with news, and in turn Canadians provide the CBC with their hard earned cash.

If everyone is paying, everyone has the right to be heard. CBC should NOT be allowed to oppress the public’s opinion.

8 thoughts on “When “News” Is Not Impartial – CBC News and censorship, a bigger problem than the Ghomeshi affair”