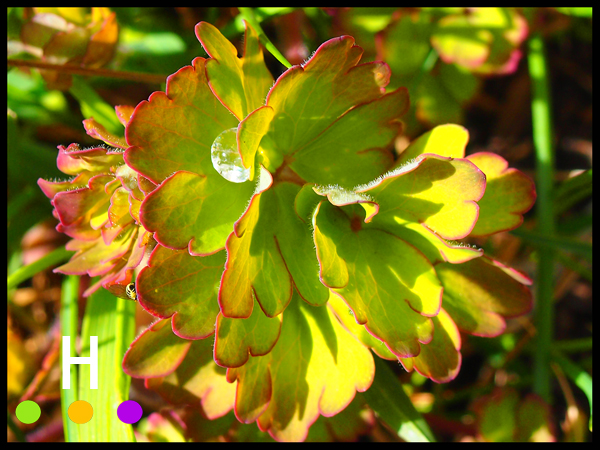 Spring is finally here which means working in the garden. I was out weeding the other day and happened to notice that drops from the rain the previous night were still sitting on the plants in the flower bed. Judging from the location the drops might be on one of the Columbines, but I am not 100% sure.

This water drop had a visitor. There is so much happening in the flower beds when you get up close.

Even the tiny plants were sparkling with droplets.

Spring may have been a long time coming this year but perhaps it makes us appreciate the new growth more.

On a side note, for readers that follow all my blogs, last night I made the decision to deactivate the most recent blog, http://www.woodleaneighbours.wordpress.com . To quote my three year old it was “not working”. It is a good move that will free up time to paint, stitch, shoot and garden more plus eliminate being involved in neighbourhood politics. Perhaps this will allow me to get more interesting blog posts up on this blog, on Island Home, and on Debra Hunter .

Time for another update on the “river” piece. I really thought I would have a lot more done on it by now. My original goal was one month for dyeing and stitching and one month for beading, I am not so sure one month was a realistic expectation for stitching a piece that is almost 3 feet in height. I did take the piece out to the coast to work on over Easter, but things like planting an apple tree, walking on beaches and finishing a fireplace took priority. (Word of advise, if you ever buy a house that has left a project unfinished for 20 years it is probably going to be a pain to complete……….as was the case with the fireplace……..but back to the topic!) I did manage to stitch from Vancouver to Kamloops on the drive home. Here is what the piece looks like at the moment: 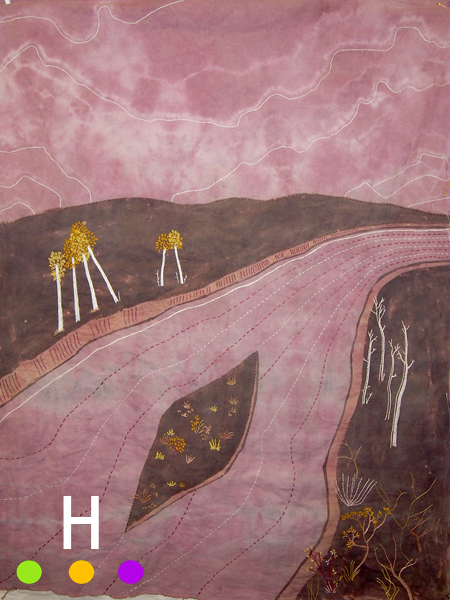 There is still a very long way to go. To give an idea of scale, the largest dead tree trunk on the right is just about 10 inches long, there is a lot of area to cover with tiny stitches.

The detailed shots below will show why this is taking so long. I can hardly wait until I am up to the beading.

The weekend looks like it will be chilly and wet (so no trip to the cabin) which will give me a chance to stitch a lot.

Visit my other blogs at:

Here are a few recent images taken in the studio. I am beginning to really like the look of a very simple and plain background. The softer lighting pattern is also a nice look. I decided to share the black and whites on this blog , however if you wish to view a few color images from the same sitting they can be viewed by clicking  here. 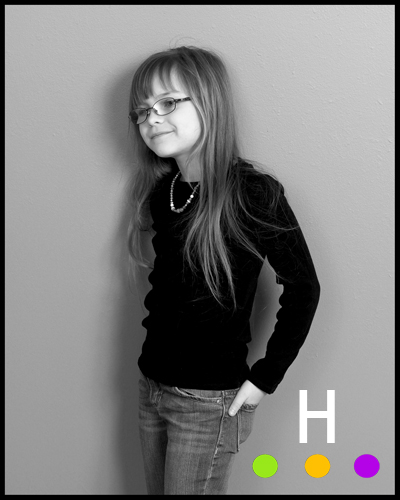 It is always a good day if dirt is involved. After all if there is dirt there probably isn’t snow….or at least as much snow! 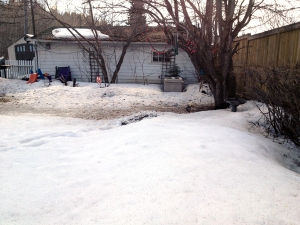 One end of our backyard looked like this, which is fine, because the flowerbeds near the house have finally started to melt off. Finally! 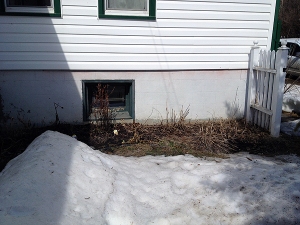 As I looked around the flowerbeds I found a lot of new growth had popped through the ground. This is quite remarkable as we have only had three or four days of warm weather.

Even more remarkable was the fact that I was cleaning up the flowerbeds as my daughter did snow angels next to me. That is just a little surreal.

I am never quite sure of what is coming up. Some plants and bulbs date back way before we had the house. Some of the bulbs are leftovers that my mom donated to me. It will all be a great surprise when they actually bloom……..well that is if the deer, moose and rabbits don’t get to them first. 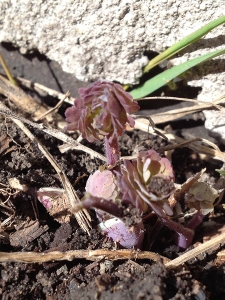 One thing that is for certain is that the beds were MUD. Sloshy and sticky, the sort of mud you sink into if you accidentally step off the grass. By the time we were done everyone had mud on them…..and was soaked through as well.

I did notice the chives are up this is good news as chives out of the gardens are wonderful for cooking.

By the end of the afternoon we did have some excitement, exciting enough to even stop making snow angels. We found ladybugs.

That is a sure sign that spring is here!

I know my blogging has been a little quieter as of late. It isn’t because I have run out of things to show and share, but more because I “had an idea”. Sometimes having an idea is dangerously time-consuming, which is exactly what has happened.

It all started with an idea for a stitched piece followed by a 5 second sketch on a sticky note. Some how this sticky note spoke to me a said “Let’s do this one big!” As luck would have it I had a piece of cotton mordanted up and so the size of the piece was determined……..35 inches by 46 inches. This is a good size for a piece being stitched.

I started with some tying.

A dip in logwood gave me the start of the background.

I was toying with a soft light theme of dawn or dusk so I decided the pink tones of lac would work.

Into the dye pot a second tying went.

The result was…….pink. So far so good.

It was then time to think about stitching thread. I had a large hank of silk thread sitting untouched since the fall. It had been sitting untouched as I really needed to roll it to make it more manageable and not tangle. I knew rolling would be a chore. I was right, but I did it anyway. Two hours later (and numerous knots) The silk thread was rolled.

Then an afternoon dye session of threads took place.

It was then time to tackle the main piece. I started by masking off the areas I wanted dark and applied cutch dye. 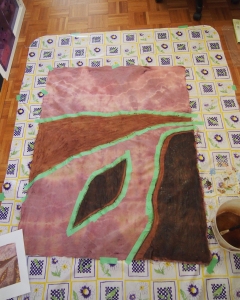 I then proceeded with an iron wash.

Once the piece was washed and dried I had softer tones to work on for the background for the stitching.

The hours of stitching then began.

This piece is still in its beginning stages with so much more work to be done. An unbelievable amount of work. It is interesting to see stitching on such a large piece of fabric (35 x 46 inches), I just hope I can keep up the dedication and see the piece through to the end.

There was an error retrieving images from Instagram. An attempt will be remade in a few minutes.