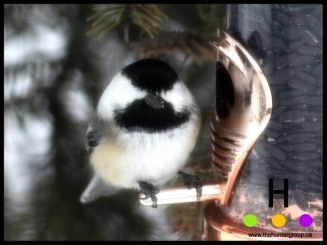 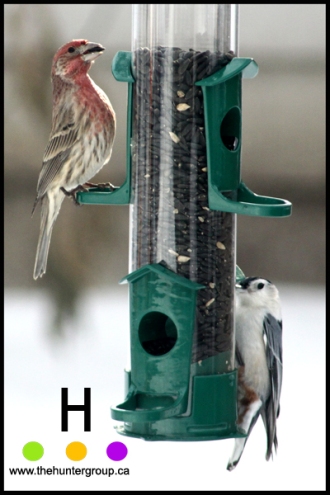 (Please click on the above images to view the gallery.)

For much of the afternoon the “Littles” and I  watched the birds visiting our  feeders. This year we have three feeders in our backyard and they are all easily viewed through the windows. We tend to have a never ending supply of chickadees, but we get a few other birds popping by for food too. They are a hungry bunch and empty the feeders every few days. The birds are also quite messy eaters, scattering seed all over the snow. I am sure we will have a few sunflowers spouting randomly where the seed has been dropped once summer comes. So far we have been lucky and the squirrels have yet to figure out the feeders, but I am sure it is only a matter of time. 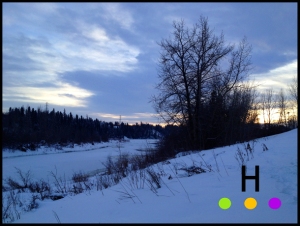 On Saturday we decided to take the family down to Bower Ponds (Red Deer, Alberta, Canada) for a late afternoon walk. It may not have been the warmest day, or the sunniest day, but after a few days filled with sick children the truth of the matter was we all needed some outside time. Desperately.

We knew the littlest could walk the small loop, especially since it detoured past the playground.

We managed to have a nice view off the bridge of the pond that will soon be frozen enough for skating. We were also treated to an up close view of a bald eagle flying (with purpose) along the river; something we definitely don’t see every day..

I hadn’t planned on doing any photography when we left for the walk, but when I saw the setting sun I decided to bring out the iphone and see what it captured. Seemed to work well for the sunset, not so much for the bald eagle zooming past! 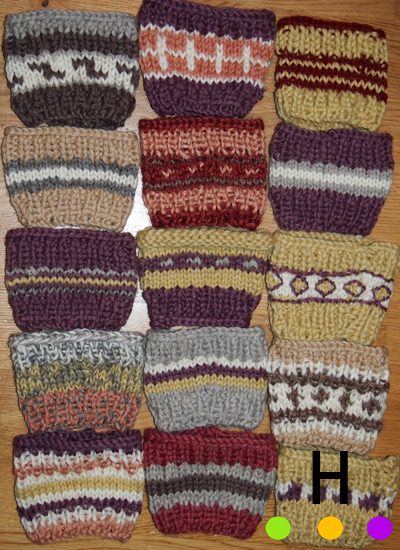 the knit up dyed yarns 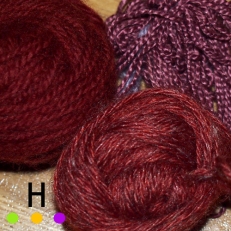 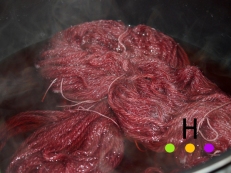 The un-dyed wool yarn after being dyed in madder. 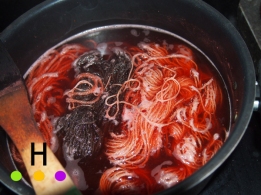 Busy, busy, busy is the best way to describe things at the moment. We have recently done a quick jaunt to the coast, and it seems as soon as my feet hit the snow back in Alberta I have spent day after day over the dye pot. I love dyeing, so that is a good thing, and you can actually keep yourself warm over a dye pot (which is even better!). I have been dyeing up wool yarns, and knitting them as soon as they are dry. I am working on a project. The best discovery of the week is lac; this dye give beautiful reds, I love it. More dyeing and knitting ahead for this week. It is a good project to settle in with for the winter. 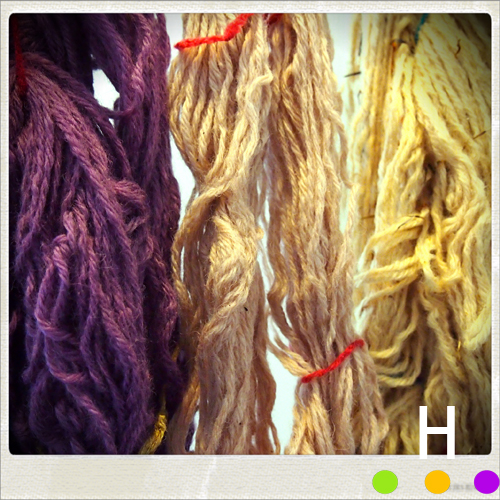 Way back in March I decided to experiment with block printing. I shared my experience in the blog post titled “Block Printing, A First Attempt” . The result was “fine” but I knew I could do more with it. So I thought about it for quite a while and then recently gave it another try.

I actually finished the piece using block printing this week. It is titled “A Catch of 10”, and I shared it on my other blog in the post “A Catch of 10 (2013) – Fibre Art – Red Deer, Alberta”. I notice that the first block printing post tends to get a lot of views so I though I would share a few work in progress pictures. 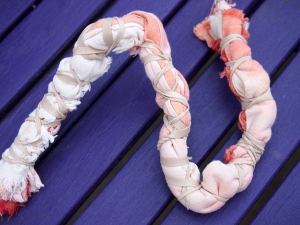 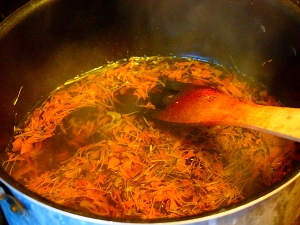 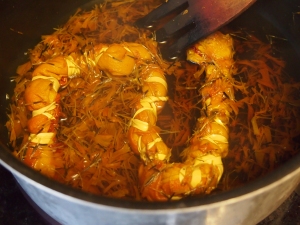 dyeing the cotton in the marigold dye

drawing the image on the lino block

two printed pieces, one iron dipped and one not 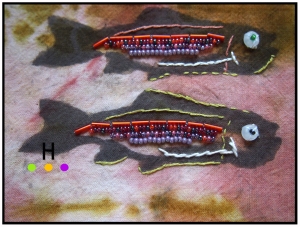 beading and stitching in progress

This piece is in a fundraiser this week. Details for the fundraiser can be found in my “A Catch of 10 (2013) – Fibre Art – Red Deer, Alberta” post.

This coming weekend is a long weekend for us here in Canada due to the Remembrance Day holiday. We always try to make the most of a long weekend, so our plan was to head from Alberta to the west coast of British Columbia to escape the snow for a few days.

It always takes a few days to get ready as packing for a family of seven is a bit of a chore; but we have been debating of whether to go or not since last weekend. Last weekend a ferry hit a dock on the island of Mayne taking it out of service for a while; this ferry just happened to be the one we usually take. The ferry being out of service already made our trip take longer, but we were willing to risk it.

Yesterday we decided to go for it and head to the coast. We had extra homework for the children as we were taking a few extra days, my husband had booked off holidays, babysitting for the fish had been arranged, we were all set.

Driving to Banff was fine, busy, but fine. By the time we hit Castle Mountain the weather was coming in but doable. We thought it would get better the closer we got to the BC border, but it didn’t.

Just after the turn off to Lake Louise things really took a turn for the worse. A quick tap of the brakes proved we were on pure ice. Passing a single vehicle accident proved the bad road conditions. The fastest anyone was driving was 60 km/h.

By the time we passed Spiral Tunnels we were down to 40 km/h and just hoping to keep the car on the road. By the time we hit Field we were driving at 20 km/h and on pure ice. Things were not improving. A decision had to be made.

We still had 813 km to travel. The roads were awful. Our ferry was out of service so we would have to take a longer route. This no longer made sense. We delivered the unpopular news to our kids that we were turning around and heading home; a five-hour drive back.

Bad weather is just a fact of life when it comes to winter in Canada. Sometimes you just have to surrender to it and make the safe choice.

(click here to see where the image was taken)

I came across a fabulous initiative  while watching “George Stroumboulopoulos Tonight” yesterday evening. The initiative is called “My Giving Moment” . The idea for the initiative has come from Canada’s Governor General, His Excellency the Right Honourable David Johnston.  The core idea is that if we all give a little, through time or talent or resources, that we can make our communities and country a better place.

Some of the ideas are big, but many are just little things that can make our communities a better place and in turn make our communities stronger. One of the easiest “moments” is to bring your neighbour’s garbage can back to their house for them on garbage day….it’s that easy. Under “Find Your Moment”  there are many suggestions of how to help out your community, and if you wish you can even add your own “moment”. There is even a fun scoring system if you wish to participate. 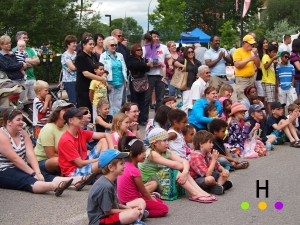 I really wanted to share the link as it is a fabulous idea. The more that participate the better our communities will be. 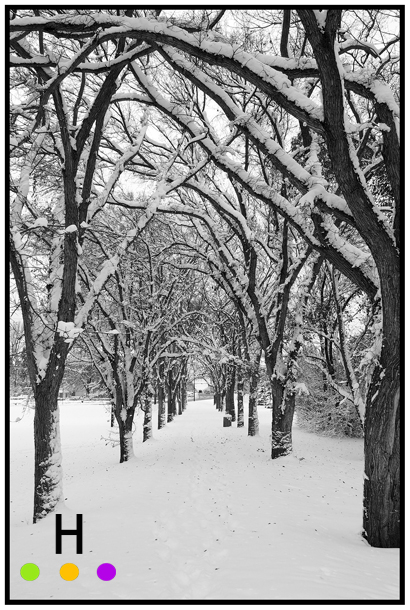 (For the record, I don’t like winter. I am in denial about winter arriving. I was the person kayak shopping on Friday. Yes, we did get REALLY stuck today……enough said.)