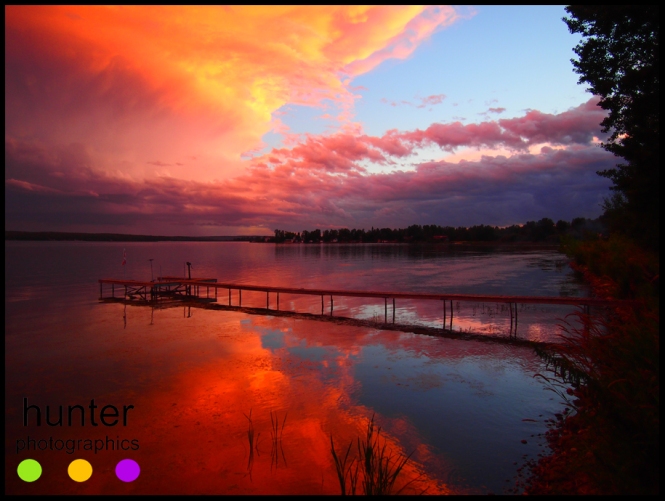 We were out at the cabin again on the weekend, a nice way to escape the noise and commitments (A.K.A. “laundry”) of the city. We had just finished clearing up dinner on Saturday when I looked out our back window that has a view of fields and trees to see a weird, funky cloud hanging in the air. I looked out our front window and noticed the same cloud hanging over the lake. This appeared to be a photo op and I just had to check it out. I quickly made the 100 meter trek down to the lake, entourage in tow, only to realize I had never seen another cloud like it. It was strange but amazing. I fired off shot after shot as the light shifted and then went. 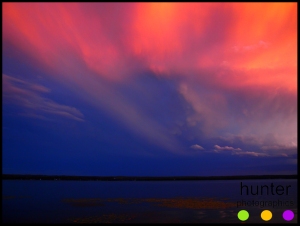 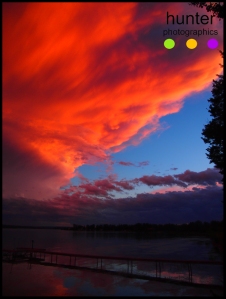 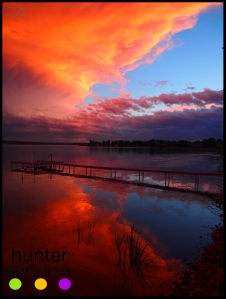 After shooting the sky we decided we needed to run out quickly for provisions…..okay, actually something in the form of an “evil” snack containing chocolate. We headed for Darwell and the sky grew darker. The store was closed. We headed for Fallis Store under even darker skies. The store was closed. (Note: we run on a very different time clock to most people, this explains why the stores were closed!) We headed to Darby’s General Store at Seba Beach under ominous skies, and the store was OPEN. RESULT! (….and it was quite busy too, probably due to the fact it also sells “liquid refreshments”!)

We went the slightly longer more scenic route on the way home. This is when the drama in the sky really started. Lightning surrounded us on all sides. Thunder clapped loudly. It was one of those unpredictable storms when you never know where the lightning will flash next. Halfway home we realized we should have taken the quicker route. The storm had all the deer on edge, we had never seen so many jumping out of the ditches and into the road. watching the lightning and watching for deer made for a slow drive home. (We hit a deer once and hope to avoid that situation again. It wasn’t much fun , but even less fun for our vehicle that suffered $15K worth of damage!)

We finally made it back to the cabin and the storm had eased a little. Momentarily. Then it returned. Lightning. Wind. Then the power started to go off periodically. When the power starts going off and on in the cabin we take care of important things first…..we put the kettle on…..seriously. Our philosophy is if you are going to be hanging around reading by candlelight you might as well have a nice hot cup of tea or coffee to drink. It is important to know what one’s top priorities are in life!

The storm eventually eased up and the power stopped going on and off. It was definitely an evening of drama in the sky.

(I had a lot less drama the next day with a lovely little photo shoot along the edge of Lake Isle. If you’d like to take a look, just click here! It’s the same dock in the background but very different weather.)

7 thoughts on “Lake Isle – Drama in the Sky”